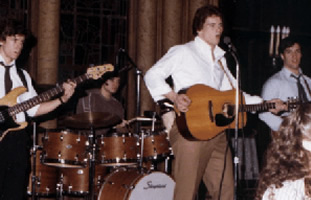 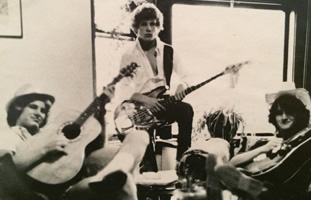 My love for music ignited while listening to my older sibling’s records on our Hi-Fi. My childhood home had a music room that consisted of a 1960’s style phonograph with huge built in speakers, an upright piano and an acoustic guitar. I spent hours as the youngest of 4 listening and singing along with The Beatles, Neil Young, The Eagles, James Taylor, Carol King and the like. My Mother started me on weekly piano lessons in 2nd grade but I found them to be tedious. I reluctantly practiced for maybe 20 minutes every Saturday morning, moments before another dreaded lesson. I endured 4 or 5 years of this routine before I finally convinced my Mother that the mandatory lessons were more torturous than beneficial. I did, however, learn to read music and understand time and key signatures, skills I rely on to this day, thanks Mom. I didn’t enjoy piano since I wasn’t learning any songs I liked. Instead I was forced to play from what I consider to be antiquated lesson books.

When I picked up the acoustic guitar I quickly learned a few chords and poof, I could play a whole song! I was hooked. I could sing and play the songs I had been listening to on those records. I quickly learned dozens of songs and together with two classmates, started playing and singing as a trio. We called ourselves The Red River Band and booked paying gigs at the local pizza places and even a few bars. Of course our parents had to accompany us but we thought we were really cool. By the time we hit High School, we were playing all over our home town and the resort area of Door County Wisconsin. The Red River Band remained together all through High School until sports and college forced us to go our separate ways.

I enrolled at Northwestern University on a football scholarship and quickly fell in with the established campus band called the Urban Worms. I was the lead singer and rhythm guitarist. Around my Sophomore year at Northwestern I met an amazing guitarist and budding recording engineer who's musical tastes were more in line with what I wanted to play. Together we formed the band No Cover. Both No Cover and the Urban Worms performed for countless fraternity parties and other campus functions.

Upon graduation from N.U. with a B.S. from the school of Speech, I returned to playing the bars and clubs of Door County as a solo act until I moved to California in 1989. There I joined another talented singer/guitarist and formed Retina Blue. We developed a following and played every Friday and Saturday night for several years before I met the love of my life Stephanie, married and moved back to Chicago to start a family.

I did the 9 to 5 thing for a while but once again, it wasn't long before I started playing out as a solo act. I was gigging in the now defunct Cabaret in Naperville where I met Frank. He was booked to open for me so we exchanged pleasantries. It turned out, many of the songs we were going to play that night were the same. I don’t know if it was fate, but that was 14 years and thousands of shows ago. When the Frank & Dave thing took off around 2002, I decided to quit my 9 to 5 and do music full time. This was the best decision I ever made, other than marrying Stephanie!

Around this same time I contacted my N.U. buddy from the band No Cover. Turned out he was living in Glencoe and had a full recording studio in his home. I had some original songs so we got busy recording. Between the two of us, we had enough material for an entire album. When it was finished, we had a beautiful studio record but no band to play for the release party. We found our original drummer from No Cover and enlisted a former band mate of Frank’s to play bass and voilà, Critical Mass was born. We played several shows to debut the record, primarily downtown clubs like Wise Fools Pub and Gunther Murphy’s. This was about the time MySpace and I-Tunes was really taking off and we discovered a few other bands that were using the name Critical Mass. We recorded our second full album as the band Sonic Footprint.

Frank and I also recorded our first two records (Two For The Show & One For The Money) in Greg Popp's Glencoe studio.

BLAST FROM THE PAST 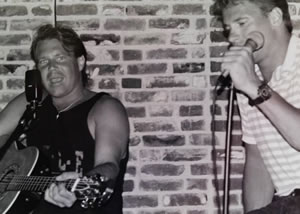 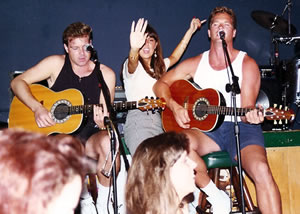