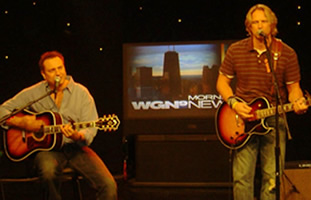 We met in the fall of 2001 at a music venue in Naperville called the Cabaret. We exchanged info and talked about getting together to try a few songs and to see how our voices blended. We did and they did. We each had a few solo gigs lined up over the next several months that we played as a duo. We kicked around a few names but nothing really struck either of us as great. We decided to just be Frank and Dave. It just rolls off the tongue better that way. There was no fight over whose name came first. :)

In August of 2002 we were booked to open for Dave Mason. This opportunity put us in front of a large number of people and kick-started our local career. November of 2005 we got booked to appear on the WGN Channel 9 Morning Show. If you missed it, you can watch the video on our website.

We would like to thank all of our faithful followers who have supported us throughout the years (you know who you are). We are anxious to keep the momentum going for many years to come, or until we get famous and blow this town, (just kidding).

See you at the next show,
Frank & Dave